Pavšlar house is a conglomerate of different styles which forms part of the history of Kranj town. Cene Avguštin PhD wrote down: »The Renaissance in the 16th century affected the image of the town ever more profoundly. Houses extended into the yard. New residential premises were connected with Italian style arcade hallways. At the time, a part of the Pavšlar's yard was embraced by one of the most beautiful arcade halls. 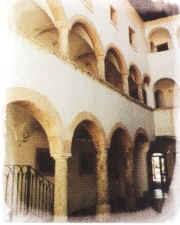 The arched part of the arcades is still clipped in the Gothic manner proving how the old forms were maintained in the town. These still prevail in the interior of the house where there are still Gothic shaped stone portals and windows. At the time, a completely new and independent building was built in the yard. The ground floor space is covered by a cross vault supported by Late Gothic pillars.

As the historian Olga Zupan says, the travelling merchants probably used this hall for storing goods and the floor as an apartment. The new building was separated from the old one with the narrow arcade yard which is evidenced by the arcade arches on the floor supported by the stone pillar. Later, both buildings were connected by a wall, and an access to the arcade yard was made through a stone gothic portal. In the 18th century, another arcade corridor was added on the south side, complementing its spatial image.

Later, another floor was built and a new façade was put on Pavšlar house at Glavni Trg, stretching across the passage leading from the square to Tomšičeva street and enriched it with a new baroque image of St. Christopher and St. Florian«.