»Socialization of a Bull?«, an animated feature film by Zvonko Čoh and Milan Erič, is a truly remarkable achievement in Slovenian cinema. Not only because it was the first feature length Slovenian »cartoon«, or because it was made using the traditional, classical animation technique, consisting of thousands of hand-drawn animated images. This itself, markedly and directly, made the film an auteur project, and also took more than ten years of persistent, hard and solitary work. It is, however, the inner artistic qualities of Čoh and Erič’s film masterpiece that stand out as truly impressive. With their genuinely clever, witty and effective animated drawings, the authors staged an effectively structured yet dramatically playful cinematic story about burning and comic phenomena of our time, ranging from love and politics to reality and fiction, always with an admirable astuteness and brilliantly spot-on satirical humour. 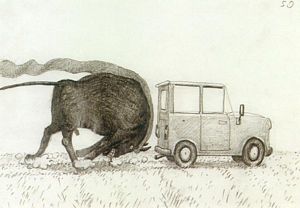