It was back in 1933 that formally trained painter and professor Maksim Sedej issued »Suburb«, a famous original print series of ten linocuts, now still considered a unique accomplishment in the field of socially critical graphic art due to its artistic force, fine poetry, and a sincere love for the common man. The same words could apply to his artworks in later years. As a painter, he captured the beauty of a peaceful existence, which he sought for in simple people from his everyday surroundings. But this is only one side of his personality. As the antipode to the classical temperance of his spirit, images of circus performers and acrobats were created. The exhibition at the Modern Gallery in Ljubljana revealed the painter’s strong, artistically learned personality, which started to develop under the influence of the Zagreb Academy only to achieve brilliant success with his family portraits. Sedej enhanced his realistic visual language by seeking new ways of expression, yet remaining essentially true to his personal style, which was an important constant in Slovenian art. 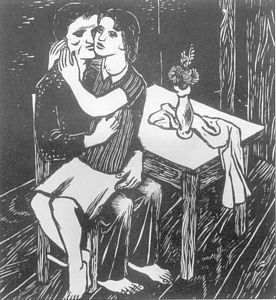