Stane Kregar paved new ways in Slovenian art with his extensive oeuvre of high artistic value, thus greatly contributing to its international affirmation. As in the 1930s, his compositions in the early 1950s were bold, renouncing the depiction of objects and human figures. With colourful characters, unique composition and harmony between individual structures of artworks, he articulated his stance to the world in a way markedly and specifically inherent to the art of painting. Despite the abstract visual language, his art bore a close relation to life, and is therefore merely an artistic take on, and transformation of, the tangible, visible world and man’s inner world. The artistic involvement and creative dissatisfaction with what had been achieved thus far prompted the artist to make a radical turn in Slovenian visual culture with paintings in which he returned to objects and figures. 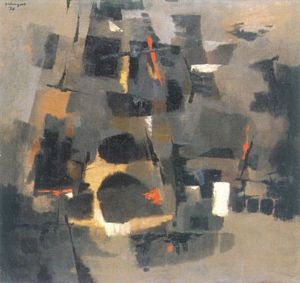