Brothers Nande and Drago Vidmar, painters and printmakers, left an indelible mark on Slovenian fine art. After WWI, they were representatives of the then revolutionary expressionism. Their drawings and paintings depicted the daunting world of the human subconscious. Soon, their drawings became more realistic, beginning to tell the truth of the world of the time. The painters exhibited their work together, like an inseparable pair, revealing the misery of peasants in their paintings and prints. At the same time, they were interested in the landscape, which seemed sad and gloomy in their paintings just as the situation was sad and gloomy for the people who lived there. Focusing on social motifs, a decision which always called for and led to a befitting, unique artistic frame of reference, they indicated their direction and later, in the partisan years, matured into prominent partisan artists. Their pre-war and particularly war-time partisan works display commitment and fatal connection of the content, lyricism and form. In the deeply felt protests voiced in their paintings by images of the deportees, blasted trains and bridges, lines of exhausted partisans, and harrowing war landscapes, one can always feel the resistance of the Slovenian people and the magnificence of the time. Their work from that time was not merely a document and a message of upright Slovenian artists, but had a broader dimension of artistic value. Although created with one single purpose: to tell the truth and mobilise, these works were honest, true artworks, at once spontaneous and thoroughly studied. In a daring synthesis, their prints and drawings from that time bring together the elements from their early expressionistic and the subsequent, more realistic periods. 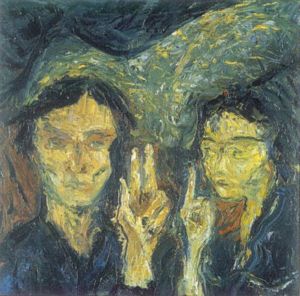