Gabrijel Stupica was an extraordinary figure in Slovenian art. Ever since the early post-war years, he had rapidly progressed from a masterly command of reality, which he often observed with the eyes of old masters, to a world of seemingly detached, sceptical, ever searching, never visually pleasing but aesthetically effective, and all the more ruthlessly truthful depiction of the existential questions of the modern man. In addition to still lifes with unconcealed personified nature, his main theme was the human being, be it his own portrait, in a children’s world or as a bride. The path which seems to form a logical whole led the painter through dark phases, to an intensively colourful, then increasingly illuminated and, finally, sheer white image, where the setting is flattened to the extreme and enhanced with an original, intentionally naive perspective. This journey is a metaphor for the author’s and everyone’s life with the kind of expressive power which made Gabrijel Stupica one of the greatest artists in Slovenia and the former Yugoslavia, as well as one of the most prominent contemporary artists universally. 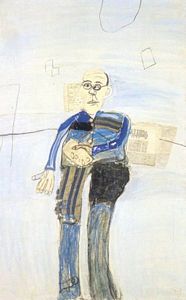