Spanning nearly five decades, sculptor Zdenko Kalin’s career, provided an important link between traditionalism and modernism in Slovenian fine art. The human body, naked or clothed, and portrait head, in bronze or stone, were the main channels of his visual message. His excellent knowledge of the human body, his mastery of the properties of sculpting materials, his feel for proportions and the dynamics of the sculpting material fired his creative imagination and enabled new sculpting solutions. In each of the categories, he created works which are at the forefront of Slovenian sculpture. His acclaimed public artworks include the statues on the monument to the victims of fascism in Urh, the monument to hostages in Žale, and statues on the portal of the National Assembly of the Republic of Slovenia. At the same time, we cannot ignore his estimable and popular statue »Shepherd Boy« in Ljubljana's Tivoli park; Kalin's superb »Children's Games«, and his extraordinary collection of portraits. In short, Kalin's entire oeuvre from commissioned works to his playful, masterly creativity bears the mark of artist's responsibility, grace, and at the same time his uncompromising stand towards fellow human beings and society in general. As a leading Slovenian contemporary figurative artist, Zdenko Kalin is also known and recognised outside the borders of his country of origin. As a teacher, he fruitfully contributed to the glorious rise of the post-war Slovenian sculpture. 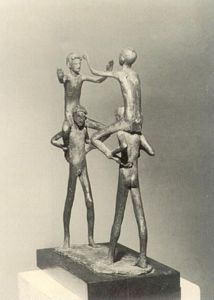