Marjan Pogačnik drew attention to his extraordinary talent with his first original prints soon after he graduated in 1949. At first, his sophisticated etchings escalated the issues raised by representatives of magic realism. His then artwork had already indicated the path he would embark on around 1960. In the meantime, his figurative art gave way to a seemingly abstract network of arabesques. Along with the new forms, he developed new technical procedures, such as a relief printing technique. Marjan Pogačnik’s artistic world can be traced back to folk art, where, however, he only took the principles and radicalised them. Emphasised by gently coloured fields, his landforms are artistic organisms with a unique way of implying continuity and exploration in yet undiscovered areas. With a gradual radicalisation and occasional transfer of accents from pure form to colour values, he developed a new type of graphic art image, which represented a break with the tradition and created a world of shapes and colours so intense and provocative as to compel us into reflection and into taking a stand. His oeuvre is featured in all major global reviews of printmaking. His prints are considered some of the best made in the territory of today’s Slovenia 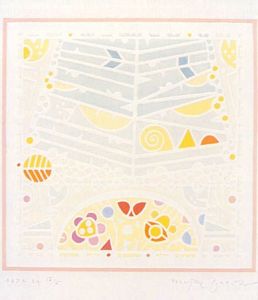