Zoran Mušič was one of the world's great modernist painters. His long and extensive creative journey started with his first Dalmatian motifs in the 1950s, followed by his Venice, Siena and Cortina series to the dark radiance of the Byzantine suite in the late 1960s. His figural motifs – including the particularly prominent tragic memory of Dachau in the series »We Are Not The Last«, his late self-portraits and portraits of Ida – were works of extreme spiritual and artistic sensitivity and depth; they are superb artistic meditations on the transience of contemporary human existence. In his late period, when the Venetian motifs dominated again, his own creative experience allowed him to reach the ultimate synthesis so personal and honourable as to hardly find a parallel among Europe’s painters. In his works, the subjective yet strict artistic principles of the Western culture merge with restrained expressiveness of his Slovenian origin and the dark, sensual touch of the East he was exploring in the Venetian art heritage. In his late works, he transformed the elements of lyrical landscape abstraction – a reference to the School of Paris, where he was a respectable member – using a relevant, completely personal, laconically perfected visual language. His art is one of the highest humanistic achievements of the modern age. 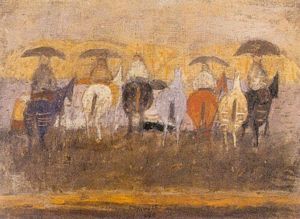