Andrej Jemec (1934)
For his achievements in art

One of the features of the remarkably prolific oeuvre Professor Andrej Jemec, a formally trained painter, has created thus far is a cyclic succession of long and short development periods in which he was addressing, and confidently resolving, the artistic issues of the time. Very few painters have their artistic careers so clearly divided in stages in terms of content and style, yet linked in a signature whole, consistent with the artist’s inherent creative character. Starting with the so-called »tonal abstract landscapes«, his first works to bring him local and international recognition with their emotionally captivated reflections, he embraced colours completely, replacing the miracle of dramatic light with a lyrical harmony of colour contrasts. This was succeeded by several years of examining the most effective ways of coexistence of colour and shape in his »kidney-shape« series, followed by a perceptive tone-colour progression in his “clouds” series and the refinement of integral colour fields. At the pinnacle of his expressive maturity it was almost as he surrendered to painting as a direct response to internal tensions. The expressive power that emanates from the relaxed strokes and suggestive colour combinations reaches the peaks of artistic radiation. The artistic content of his trembling handwriting was additionally intensified by associative characters – from signs to anthropomorphic shapes. This closed Jemec's development cycle, bringing it through modernistic abstraction towards simultaneous post-modernist observation. As a prominent representative of contemporary – especially Slovenian – painting and graphic arts, he has received a number of domestic and foreign awards, including Slovenia’s highest recognition, the Prešeren Award. 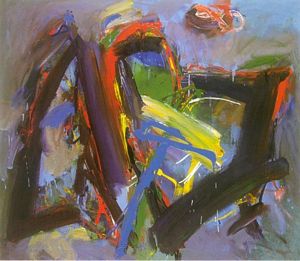