»I refuse to educate students. I never wait for the crowd response either. If there are ten visitors at my exhibition who know what it is about, that is enough,« said Bogdan Borčić, a painter and a printmaker, who was actually educating new artists all his life. He was an excellent teacher who educated many generations of printmakers as a professor at the Academy of Fine Arts. At the same time, he constantly cultivated the tastes in art and the sense of humanity of many art lovers at home and abroad. His creative path was exemplary and, at the same time, an explicit demonstration of the post-WWII development of a modernist expression. It started with the classic academic education, continued with transformations of both human and animal figures and objects into artistic signs and symbols, and evolved into his personal version of a minimalist abstraction. His oeuvre reveal traces of every art movement of the second half of the previous century: from the existentialist figurative art to the informel, from pop art to the hard-edge painting, from lyrical to geometric abstraction, from the new realism to conceptualism. Borčić mastered all contemporary creative styles easily due to his art worldliness and broad theoretical knowledge; however, his creations never turned into reckless reproduction or imitation. Unlike most members of his generation around the world, Borčić did not include fashionable stylistic transformations in his work when they emerged. Having a completely clear opinion on them, which originated in his own practice, he only used them when the internal logic of his own work demanded it. Symbolically, the comprehensive and logically built collection of Borčić's works acted as an apotropaic deflection from any kind of human entrapment and confinement, bringing in the centre a free individual who enters a wide network of human relationships voluntarily and responsibly instead. The artist consciously abandoned the camp theme early on (in his loyalty to the modernist creative ethics, Borčić explained that Mušič’s camp images simply could not be exceeded) and undertook a metaphorical task even more demanding, which he fulfilled just as credibly as his role model. With a remarkable sense of the art poetics, his prints and paintings transformed the motifs of horror into motifs of superior aesthetics and deep humanity. 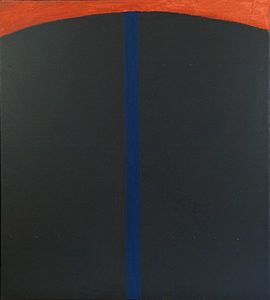