JERAJ'S COMPENDIUM Zmago Jeraj rose to prominence in almost all fields of visual arts. His work was always open to various initiatives and enthralled by global artistry, which he not only drew on but also contributed to. As his university education and subsequent training took place not only in Slovenia, he soon developed his own distinct artistic style. In his large portraits and metaphysical urban and landscape motifs, using any technique, he confidently merged figurativism and the non-figurative expression of colour fields. In the late 1970s, he started to develop a series of drawings which seemed at first like a break from his analytical study of abstract and other modernist principles of art and from the critical content of his previous works. His motifs were now shaped like a personal interpretation of simple things. But at the same time, they convey a keen interest for various visual media as well as first-hand experience with prolific and thoughtful creative endeavours. In addition to painting, Jeraj also pursued conceptual drawing, studies, black-and-white and colour photography, various printmaking techniques, film experiments and prudent, psychologically effective stage design. His practical work was always firmly based on art theory, critical and pedagogical thought. While taking an interest in the visual field in its entirety, he always eagerly followed all areas of human existence and creativity, ranging from the philosophical to the scientific. The universal compendium of the artist's imagination was forcefully released at the time when a new kind of image and its derivatives prompted the expansion of the artist's sense of irony and humour. The interplay of different imaginary and realistic levels is very convincing in these works also because it is given meaning by Jeraj's signature artistic expression influenced by his then work in theatre scenography. The spirit of the depicted scenes reminiscent of expressionist black-and-white films is captured in a vivid colour palette. Although static, the scenes retain the dynamics of horror and psychological distress in convulsively deepening and crooking spaces, fleeing or rushing figures, which often brandish weapons, or moving vehicles, unusual light and penetrating stares. Jeraj's wit is not always light, it is often bitter, perhaps even scornful. Therefore in paintings, it is often disguised and ambiguous. The painter himself described his latest works best when he wrote: »The more the oeuvre grows, the more discontinuity gives way to continuity.« The works invoke the memory of capricci from late Renaissance and Mannerism, when artists started abandoning faithful depictions of the real world, and Christian or mythological iconography, and looked for new motifs. Fantastic and strange, often improvised ideas began to emerge, which were the result of their inspiration alone or borrowed from another repertoire. The fantasy landscapes were inhabited by unusual figures, the remains of real and imaginary pieces of architecture and miraculous events. Callot's or Tiepol's capricci were cheerful, Piranesi's fantastic, and Goya's eerily satirical. What they all excelled in was mastery and the lightness of delivery, which demonstrated hard work, careful reflection, and complete control of the metier. Jeraj had previously gained this experience through analytical reflection on art history, through his many interests, and in particular through his constant honing of all kinds of sentiments. His latest paintings seem like visualised musical compositions, which could also be capricci. Therefore, we listen to hear their melody, enjoy the tonalities conjured by specific colours, which blend into a potently harmonic orchestration of strokes. Jeraj kept the scenery of his previous period but softened, and started to blur, the hard edges of spatial boundaries and visual pitfalls. He also increasingly obscured characters and other recurring objects, only to soon be left with houses as the only source of motifs. Accordingly, his last series was named »The Neighbouring Houses«. Metaphorically, his former expressionist scenes were blanketed with an impressionistic veil. He applied colours to canvas with an extraordinary feeling, often achieving kaleidoscopic transparency, their juxtaposition at times so daring as to reach the limits of theoretically and empirically defined harmonies, thus creating new, yet unseen imaginary worlds. Similarly, in his later years Monet saw his motifs, particularly water lilies, as nothing more than coloured mist, slowly descending onto the canvas solely as a result of his experience of them. Bonnard and Vuillard depicted their scenes as if weaving a tapestry. The Fauvists painted motifs as if seeing them through a trellis completely covered with colourful ramblers. Raoul Dufy was the most daring of them, his colours separating, pulling out from under the contour as in badly printed work or the vernacular press. In a similar way, Jeraj's warm ochres or the bright red shine through the cold, transparent blue, the green trembles in the orange, and the purple only gains its full expressive power once the artist combines it with the emerald. Jeraj's latest canvases become colour spectra – subjective membranes in which the artist incorporated his experience of the metier as well as his philosophical experience of life. That is what makes them like screens where the artist's subjective can meet with the spectator's. Through film screens, posters, and TV, computer and other screens, we are daily bombarded by an increasing range of things and people, to the point that makes it impossible for us to escape. To take shelter, here are the witty and clever metaphysical oases of Jeraj's compendium. Jure Mikuž 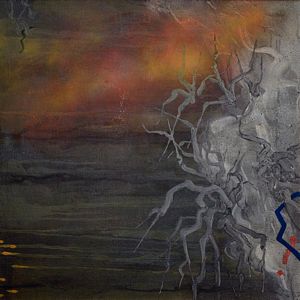